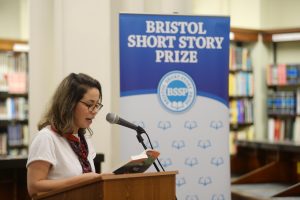 The 2017 Bristol Short Story Prize has been won by Manchester-based writer, Dima Alzayat. Dima was announced as the winner at an awards ceremony held in Bristol Central Library last Saturday. We took the opportunity of finding out more about Dima’s very powerful and moving winning story, Ghusl, her writing, influences and what this very talented writer has planned for the future.

What does being the winner of the 2017 Bristol Short Story Prize mean to you?

I was and still am genuinely surprised and delighted to have won. I spend a lot of time working on my stories, in that I’ll write a story, put it aside for a while and then return to it time and time again before I attempt to get it out into the world. Sometimes this long process can make me forget that my work is ultimately for readers. Winning the 2017 Bristol Short Story Prize is a great honour – it’s encouraging and affirming. But most importantly, it gives this story that has lived with me for some time an audience. Finding and connecting with readers is the reason I write, even if the process can at times feel disconnected from this ultimate goal.

What inspired your winning story, Ghusl?

So much of what we hear, whether it’s here in the UK or in the US, about the Arab world and the people who live in and come from that region is reductive. People become numbers and individual stories are lost or silenced. This story, like others in the collection I’m currently working on, pushes against this silencing. It’s about an individual who was forced to leave home in order to escape violence, only to find herself grappling with something even more difficult and much more heartbreaking.

You grew up in the US but are now a PhD student at Lancaster University – what made you choose Lancaster for your course and how does studying Creative Writing affect the way you write. 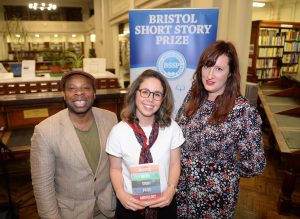 While studying at the University of Edinburgh for my master’s, I liked what the physical distance from the US did for my writing. Being able to look at what it means to be an American while not living there has allowed me to get at deeper truths than I would have otherwise. I was drawn to Lancaster University because of its wonderful English and Creative Writing faculty, and I’m lucky to have brilliant and supportive supervisors and mentors in Jenn Ashworth and Lindsey Moore.

Because my PhD is equally creative and critical in nature, I’ve had to learn how to balance my time (and mind!) between working on my fiction and researching and writing my critical work. It can be challenging, in that at times, while working on a story, I have to distance myself as a critic and allow myself the creative space to experiment and take risks without analyzing what I’m doing as I’m doing it.

What role do you think writers can play in these turbulent political times?

I think good writing is capable of challenging beliefs and instigating dialogue. However, I do feel that perhaps the majority of readers read books that someone they like has recommended to them or they’ve heard is the ‘new thing’. After the US elections we heard a lot about the ‘echo chamber effect’ and I think this applies to how people read; I’m not sure how many readers want to be challenged or taken out of their comfort zones. So, I don’t really know what impact writers can have on a grand scale. That said, I think as a writer it’s still important to try to put work out anyway, to name falsehoods, to find nuance, and to hope that it will find readers and resonate with them.

Which writers or stories have had the biggest impact on you – especially short story writers or collections?

A strong short story can be reminiscent of a fine painting or a well-composed piece of music – its language subtly crafted, its rhythm and tempo as considered and essential as character and plot. When I think of short story writers who have left me breathless and evoked in me this sense that what I was reading was more than words on a page, but rather that I was absorbing entire worlds and ways of being human, I think of Flannery O’Connor, Raymond Carver, Jhumpa Lahiri, Junot Díaz. I particularly felt energized reading Díaz’s first story collection, Drown. There’s a discernible pulse, I think, in the language he uses, and how he uses it. Reading him made me rethink what it meant to be an American writer, to write in English but to challenge it, to push against the borders of what it means to be American. If I’m thinking of novelists who also did that for me I’d say Toni Morrison, especially Beloved, Sandra Cisneros, James Baldwin, Rabih Alameddine. I’m also increasingly drawn to books that make me question what a short story is, what a novel is, what form is. Recently that’s included Claudia Rankine, Joanna Walsh, Anne Carson.

I’m currently working on a short story collection that explores Arab diasporas in the English-speaking world, particularly the US. Some of the stories directly address ethnicity or religion, while others don’t. My aim isn’t to romanticize or attempt to explain what it means to be Arab and/or Muslim, but to perhaps complicate the often-oversimplified representations of these individuals and/or communities. 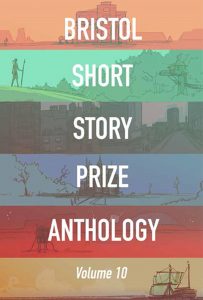 Dima’s brilliant winning story, Ghusl, plus the 19 other stories from this year’s Bristol Short Story Prize are available in our wonderful new anthology published by Tangent Books.