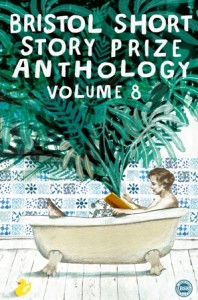 Once again this year we are very fortunate to be publishing an anthology featuring 20 fantastic writers. And with the 2015 Awards Ceremony only 12 days away, we are delighted to introduce the 20 writers who are in the running for this year’s top prize.

Michael Bird is an award-winning journalist and writer based in Bucharest. His short fiction has been published by Pulp.Net

and he has been shortlisted for the Wells Festival of Literature Prize in 2011, the 2012 Hayward Gallery George Condo Prize and the 2013 Bristol Short Story Prize. He is winner of the 2015 Award for Best Initiatives of European Online Investigative Journalism (European University Institute, Florence, Italy). His work has appeared in multiple languages and been published in the Independent on Sunday, Tagesspiegel, Design Week, New Statesman and the EU Observer.

Lisa K. Buchanan has contributed fiction and essays to The Missouri Review, Narrative, New Letters, and The Rumpus. She lives and teaches in San Francisco.

Gina Challen is originally from London, and moved to West Sussex in 1979. Whilst working as an Insurance Broker, she began a BA (Hons) in English and Creative Writing at the University of Chichester. In 2012, she left her job to complete a Masters Degree in Creative Writing. This she fondly calls her mid-life crisis. Her short stories can be found in anthologies published by Cinnamon Press, Willesden Herald and Rattle Tales, and have been read at the Shoreham Wordfest. Her critical essays are published online at Thresholds Short Story Forum.

Florence Delaney lives with friends on the banks of the River Lee. She is a data analyst for kidney transplant research. She

loves painting, peaches, blackbirds and the Cornish sea. She is writing a series of 22 stories, one for each card of the Tarot Major Arcana. The High Priestess and The Hermit have been published in the online magazine Don’t Do It.

Chris Edwards-Pritchard is a 25 year old writer living in Gloucestershire, UK. His work has been published in a range of anthologies and magazines, including New York journal the Bellevue Literary Review, and the Irish Literary Review. One of his stories has been considered for broadcast on BBC Radio 4, and last year, he was delighted to accept the Gregory Maguire Award for Short Fiction in London. This is the second time his work has appeared in a Bristol Short Story Prize Anthology.

Jane Eaton Hamilton is the Canadian author of eight books of short fiction and poetry. Her memoir, Mondays are Yellow,

Sundays are Grey, retitled No More Hurt, was a Sunday Times bestseller and included on the Guardian‘s Best Books of the Year list. She is the two-time winner of Canada’s prestigious CBC Literary Award for fiction (2003/2014). Her work is included in The Journey Prize Anthology, Best Canadian Short Stories and appears in publications such as Salon, NY Times, Seventeen magazine, MS blog, Full Grown People. She is also a photographer and visual artist. She lives in Vancouver.

Mark Illis has had three novels published by Bloomsbury, and more recently two by Salt, Tender and The Last Word. His short stories have appeared in many magazines and anthologies. Mark’s also had three radio plays broadcast, and has written extensively for television. He has also written the screenplay for Before Dawn, which won the Best Screenplay award at the Bram Stoker International Film Festival. He lives in Yorkshire with his wife and two children, and is currently writing a Young Adult novel.

J.R. McConvey is a writer based in Toronto, Canada. He is the author of an e-book, The Last Ham, published by House of

Anansi Digital. His short fiction has appeared in The Malahat Review, Joyland, EVENT, The Dalhousie Review, The Puritan and other outlets, and his stories have been shortlisted for the Matrix LitPOP award and the Thomas Morton Prize. He also publishes assorted bits of poetry and journalism, and regularly reviews books for The Globe and Mail.

Ríona Judge McCormack has spent nine years working in the international development sector, and has lived and worked in Cambodia and South Africa, as well as her native Ireland. She is currently shortlisted for a 2015 Hennessey Literary Award, and has been shortlisted for both the Fish International Short Story and Flash Fiction Prizes. Her fiction and non-fiction work has been published in the Irish Times, New Irish Writing, Sassafras Literary Magazine, Southword and F(r)iction Series. She currently lives in Johannesburg, where she is completing her first novel. Twitter:@rionajmc

Magdalena McGuire was born in Poland, grew up in Darwin, and now lives in Melbourne with her husband and her

collection of vintage dresses. She is an avid reader and particularly enjoys reading books about girls who like reading books. Magdalena has published widely on human rights topics, including women’s rights and the rights of people with disabilities. Her fiction has been published by The Big Issue and Margaret River Press.

Fiona Mitchell is a features and fiction writer. This year, she won the Frome Festival Short Story

Competition and her work has been shortlisted in various other competitions including the Writers & Artists Short Story Competition. This is the second year in a row that Fiona’s work has been included in a Bristol Short Story Prize Anthology. She has just finished a rewrite of her first novel, The Maid’s Room, and is editing her second novel, while working on ideas for a third.

P.K. Read is a French-American writer. She’s published several short stories, written screenplays, worked for many years as a translator and had a surprising hit with a German-English film dictionary. She’s never not working on another novel. She’s a keen environmentalist, whisky enthusiast and a resigned gardener.

Derek Routledge was born in York and lives in Wales. His poetry has been published in Poetry Wales and the Anglo-Welsh

Review. His short story Key Under the Mat was adapted for BBC Radio 4 Woman’s Hour in 2005. The War on Television won the 2006 Sheffield Theatres’ Cued Up runner up prize, selected by Sam West, for a performed rehearsed reading at the Crucible. It also won the 2006 Drama Association of Wales Best Play Award for youth cast, published by DAW 2010. Birthplace won a 2011 Rhys Davies Short Story runner up prize. He is currently completing a novel selected for the spring 2015 Curtis Brown Online Novel-Writing course.

Penny Simpson completed an MA in the Theory and Practice of Human Rights at Essex University, and now divides her time between further academic studies and prose. She has published two novels, The Banquet of Esther Rosenbaum and The Deer Wedding, and one collection of short stories. Her novella, In Wolf Village has been shortlisted for the 2015 Novella Award. She has been the recipient of an Arts Council of Wales New Writers’s Bursary, an Arts Council Travel Bursary, and a Hawthornden Fellowship. She is currently working on a new collection of short stories.

Emma Staughton was born in Plymouth and graduated from Oxford Polytechnic in 1988 with a BA (Hons) in Architecture.

After working in London and New Zealand, Emma moved to Cornwall in 1999 and rediscovered a childhood passion for writing. In between building projects, and with encouragement from her husband and book club, she completed a Masters in Creative Writing at Plymouth University in 2014, graduating with a first. Emma has written poetry, a novel and ten Cornish-based short stories. She lives on a farm near St. Austell with her husband and two dogs.

Emma Timpany was born and grew up in Dunedin, New Zealand. She loves reading short stories as well as writing them. Her stories are published in the collections The Lost of Syros (Cultured Llama Press) and Over the Dam (Red Squirrel Press). Her novel, Travelling in the Dark, is forthcoming from Rosa Mira Books. She’s currently working on a full length work of fiction which further explores her own, and her family’s, experiences as florists and flower growers.

forthcoming from Invisible Press in the spring of 2016. Other work is forthcoming in The Prairie Journal and Prairie Fire Magazine and appears in EVENT Magazine, Litro Magazine, The Dalhousie Review, The New Quarterly, The New Guard Literary Review, and Mash Stories. He is a graduate of the Humber School of Writers and holds an MFA in Creative Writing from the University of British Columbia.

Alison Wray grew up in London. She gained a BA and doctorate in Linguistics at the University of York, and now works at Cardiff University as a Professor of Language and Communication. As a researcher she has published contributions to understanding how language is learned and how communication is disrupted in dementia. Although she has reached the long list in three previous short story competitions, Natural Order is her first publication in creative writing. Alison is also an accomplished classical singer, performing art song, oratorio, opera and chamber music around the UK and, occasionally, more exotic places, including China and Kenya.

Jeremy Charles Yang is a young Chinese-British writer from Hong Kong, currently based in London. Having completed an

undergraduate degree in Psychology at University College London, as well as publishing his first story, shortlisted in the UCL Publisher’s Prize, Jeremy resolved to pursue a career in writing, in addition to his dreams of rock stardom and becoming a pirate. He is currently working on a series of short stories and two novels, both of which are taking a very long time. Piracy is beginning to look very appealing.

which is available to pre-order here.