It is with great pleasure that we announce the shortlist for the 2015 Bristol Short Story Prize. The 20 stories on the list will 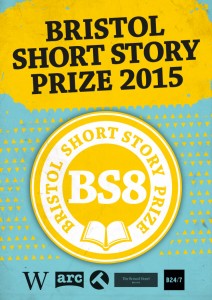 be published in the 8th Bristol Short Story Prize Anthology and are in the running for the £1,000 first prize. As in previous years we have been extremely fortunate to work with a fantastic panel of judges – we raise a glass and give thanks to the mighty Sara Davies, Rowan Lawton, Sanjida O’Connell and Nikesh Shukla for their extraordinary conscientiousness and enthusiasm, and for putting together what will be a wonderful anthology.

“This year once again there were nearly two and a half thousand entries to the competition: a fantastic response, and a huge task for the readers who between them drew up a longlist of forty varied, challenging, wide-ranging and moving stories. They did a brilliant job; all forty were exciting to read, and deciding on just twenty for the shortlist was far from easy.

“One of the biggest pleasures in reading the longlist was the global spread of the entries: stories had come in from all over the English-speaking world, and their subjects ranged from the small and seemingly domestic to the big issues around political upheaval, immigration and war. There was much to admire, and much to enjoy, and we deliberated long and hard about which twenty we felt should go forward. We looked for those stories that stayed with us after reading, that we could return to with pleasure, and that rewarded close attention. Our commiserations go to those disappointed longlisted writers who didn’t make it through to the shortlist; your stories made it through some tough competition and gave us a lot of pleasure. Our congratulations to those twenty who will be published in the 8th Bristol Short Story Prize Anthology; we were really excited to find such a range of storytelling talent. And a big thank you to every writer of the two and a half thousand who entered; keep writing those stories and send them in next year!”

Between the Pickles – J.R. McConvey (Canada)

A Week on the Water – Brent van Staalduinen (Canada)

*The Guest House by Candy Neubert was withdrawn from the shortlist by the author on Thursday August 6th. It has been replaced by Derek Routledge’s story, Dance of the Light Deprived Children.